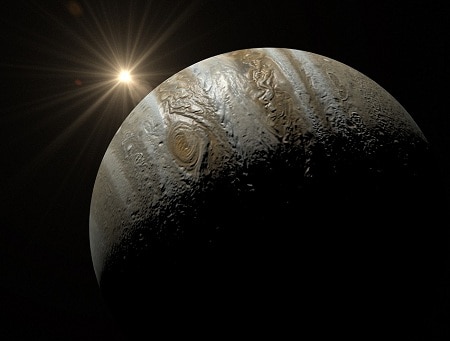 In this article, I am going to explain if you can really see Jupiter with a telescope from earth or not. If you want to know about it too, don’t forget to read the rest of the article.

Yes, you can definitely see Jupiter with a telescope. A scope of 6 inches is enough to see Jupiter clearly. You just need to know where to look and when.

Why Jupiter Is Easier To See?

Jupiter is the biggest planet in the solar system. In fact, it is so large that the Earth can fit inside the Jupiter 1300 times! This single information left me at awe for a minute!

If you combine Earth, Mars, Mercury, Venus, Saturn, Uranus and Neptune, still you won’t reach the mass of Jupiter. In fact, Jupiter is so large that the mass is twice than the combined mass of other planets.

As Jupiter is SO LARGE, it is far much easier to see through a telescope, even easier than Mars, Though Mars is much closer to the Earth.

The best time to observe Jupiter is when it reaches the opposition. The Jupiter opposition simply means Jupiter forming a straight line between Sun, Earth and itself.

The opposition night comes after every 13 months. However, Jupiter remains clearly visible throughout the whole opposition month.

During opposition, the Jupiter disc can reach a radius of 25 arcseconds. It allows us to observe even the smaller details of Jupiter, because around this time the planet appears 60 times larger!

If you have even a small telescope, you can observe the super details of Jupiter’s disc. Along with the 4 Galilean moons, you can even see the surface features of Jupiter.

This is why Jupiter falls into the GoTo planet category for most beginner stargazer.

How To See Jupiter?

Here I am explaining step by step how you can see Jupiter in the night sky:

Jupiter doesn’t always remain visible in the night sky. Like most of the celestial objects, it remains invisible as it stays below the horizon. So, before even setting up your telescope, you need to know if Jupiter is on tonight’s sky from your geographic location.

My favorite way to know if Jupiter is observable tonight is by using a software. You can either use a free software like Stellarium, or a paid one like Sky Safari. Of course, with the paid one you’ll get much more features.

1. Once you got to Stellarium, you’ll see something like this below. You can either download the software or try out the web version. I am going to select the later.

2. Once you go to the web version, it should automatically locate your geographical location. If it doesn’t, set your location in the lower left corner.

3. Once you set the location, the screen should offer you a view of the night sky that is observable from your location. Now all you need to do is write the name of the celestial object you want to locate in the search box. I typed ‘Jupiter’ and selected the Jupiter Planet option from the dropdown list.

4. After you select, the software will show you where to look and when. It is as easy as that!

Step 2: Seeing Jupiter Without A Telescope

Earlier I have mentioned why Jupiter is so easy to observe from the earth. It is the third brightest object seen from Earth, after Moon and Venus. Consequently, you can easily locate and observe Jupiter even without a telescope.

All you need to do is locate the Jupiter first using a software. Referring back to the previous section, in Stellarium, when you locate Jupiter, it will offer you additional information like below:

We can see that the Altitude is set at roughly 19.5 degrees from the South-East horizon.

If you are not clear how to measure angles, here are some quick tips:

To roughly measure angles, you can use hand shapes. Click here to learn more about hand shapes and angle measurement.

Step 3: Seeing Jupiter With A Telescope

First, follow step 2 and identify the position of Jupiter with the naked eye. Then set the Finderscope properly and keep the Jupiter on the center of your Finderscope.

Now, look through the eyepiece to see if the planet is in view or not. If you have actually identified Jupiter, the bright object will appear as disc-shaped. You can rotate the focus knob to get a clearer image.

To ensure further if it is Jupiter, you should see 4 dots of light directly in a straight line with Jupiter. These 4 dots can be on one side or split up between 2 sides of the planet.

I’ll also share how you can observe these Galilean moons further.

There are plenty of telescopes with which you can observe Jupiter. However, not all of them are completely geared for beginners. I have found Gskyer Telescope to be the most beginner-friendly and best suited for observing Jupiter. It comes with 3 eyepieces: 22mm, 11mm, and 10mm. So, you can even observe the Jupiter Zones & Bands and the Great Red Spot with this telescope.

This telescope is currently available on Amazon. You can even get a FREE SHIPPING. Check out the current price here on Amazon.

Now that we have observed the Jupiter, there are 3 more things we can see with a telescope:

The 4 Galilean Moons are: Io, Europa, Ganymede, and Callisto (according to the closest from the Jupiter to the furthest). All of these moons are even larger than the Pluto, so we can clearly observe them.

They are named the Galilean moons because the famous scientist and astronomer Galileo Galilei first observed them in 1610.

Io takes the shortest time to orbit Jupiter. On the other hand, Callisto takes the longest time.

Here are the orbital periods of all the Galilean Moons:

Observing the moon is similar to observing the Jupiter itself. First, locate the moons and their position according to your geolocation with your favorite astronomy software. With a good telescope and darker sky, you can clearly observe all of these moons.

For observing transits and occultation of the moons, you can use an almanac. Here’s one you can use.

Now that we have observed the 4 Galilean moons, it is time to look at the next big feature of Jupiter: its cloud bands.

The Jupiter surface has lines of divisions. They are of 2 types: darker and lighter. The darker ones are called bands and the lighter ones are known as zones.

There are about different zones and bands. However, all of them are not visible.

You may need to push the magnification further to spot the different bands and zones. It shouldn’t be a problem as Jupiter is itself HUGE.

If you don’t know yet, the smaller the eyepiece is, the greater the magnification will be. For example, a 10mm eyepiece will give you higher magnification than a 20mm eyepiece. So, don’t hesitate if you need to select a smaller eyepiece.

When changing eyepieces, it is essential to go gradually rather than jump. Do not go from 30mm to 9mm. if you are using a 30mm eyepiece, then shift to 20mm first, then 10mm and continue on gradually.

To observe the great red spot, first, we need to look at the disc of the Jupiter.

If you look closely, you’ll see that it is not that spherical. The disc is fattier in the middle, more like a squashed ball. This is because of the very high spinning speed of the planet on its axis. The earth spins on its axis at a speed of 1000 MPH which gives us a 24 hour day.

However, the Jupiter spins at 28,000 MPH which makes one rotation period on its axis only 9.5 hours long!

So, you can imagine how fast the Jupiter rotates.

The thing is, with the Jupiter, the Great Red Spot spins too at the same speed. It faces the Earth at least 2 times per earth day. So, to observe it, all we need is the timings and of course, a telescope capable enough to see it.

Most astronomy software like Sky Safari will provide you with the transit timings. So, it won’t be a problem to get that information.

Once you know the transit times, you need to have a telescope that is powerful enough to observe the red spot.

Though the Great Red Spot, a powerful raging storm on Jupiter’s surface, is double the size of the Earth, the distance still makes it quite hard to see.

To properly observe the Red Spot, you’ll need favorable conditions like a very dark sky. Also, the best time to observe the Great Red Spot is when the Jupiter is at its opposition.

You’ll probably need to use 100x to 150x magnification too.

Also, you can use a green telescope filter to increase the odds of your observing the spot.

Lastly, DON’T GIVE UP! Seeing the Great Red Spot is definitely a challenge and requires quite a lot of effort and expertise. Don’t expect to see it at the first try. Try again and again.

Hopefully, you can see the GIANT STORM soon!