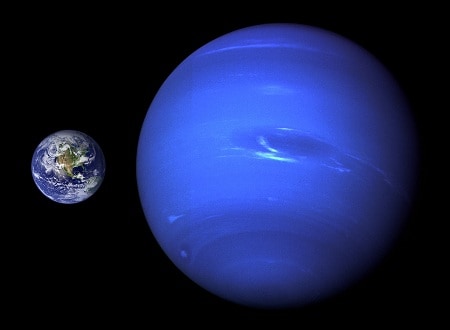 Neptune is the 8th and farthest planet in our solar system. Previously I have talked about how to see Jupiter and Saturn with a telescope. Now it’s time to tackle the trickiest one, Neptune.

Can you see Neptune with a telescope? Yes, you can. In fact, it is the only planet in the solar system you can’t see with naked eyes. Neptune’s highest brightness magnitude is 7.6 whereas our eyes can’t see beyond 6.5. Therefore, the only way to see Neptune is with either a binocular or a telescope.

Though Neptune is smaller than the Uranus, it is 50% farther away too. The incredible distance from Earth makes it very challenging to observe Neptune. However, if you know where to look, you can spot out the icy cold giant.

Being so distant from the sun, Neptune hardly receives any warmth of our Star. As a result, Neptune’s cloudy atmosphere is renowned for having one of the coldest temperatures in our solar system.

The temperature of the cloudy atmosphere of Neptune is 55 Kelvin. In regular language, it is -361 degrees Fahrenheit or -218 degree Celsius.

As Neptune is so much away from the sun, Neptune seems to hardly move in the night sky. Throughout 2019, Neptune will be visible in the constellation Aquarius.

These visible characteristics of Neptune will help us to spot it better:

How To Spot Neptune With A Telescope?

To spot Neptune in the night sky, we need to walk through a trail of stars. It may prove to be quite challenging at first, but with practice, you’ll get to Neptune quicker.

Now we have the trail, let’s look at it in details: 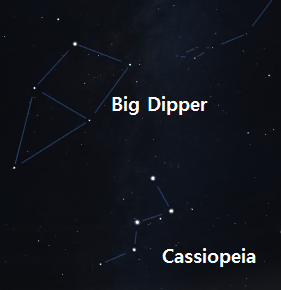 To start our journey, we need to first find the constellation Cassiopeia the Queen. It is easy to spot because of the familiar figure ‘W’ or ‘M’ depending on when you are observing it. 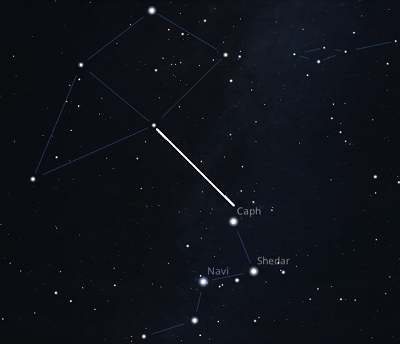 Now that we found Cassiopeia, we need to spot the star Caph. Caph is located on one end of the constellation. If you draw an imaginary line from any star of Big Dipper’s handle towards the Cassiopeia, the first star you’ll get to will be the Caph.

Look at the figure above for better understanding:

Step 3: Finding the star Alpheratz of the Great Square of Pegasus

Now we need to pinpoint the star Alpheratz of the Great Square of Pegasus. It will be easy.

Just connect the Polaris (North Star) to the star Caph (we found in step 2). Now double the distance of the line. The line will point to Alpheratz. Alpheratz is one corner of the Great Square of Pegasus. 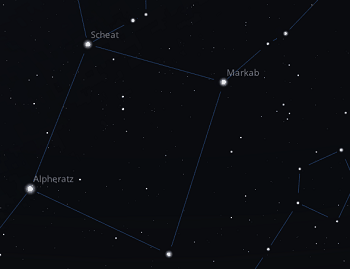 Now that we located Alpheratz, the other two corners of the Great Square will be Markab and Scheat. 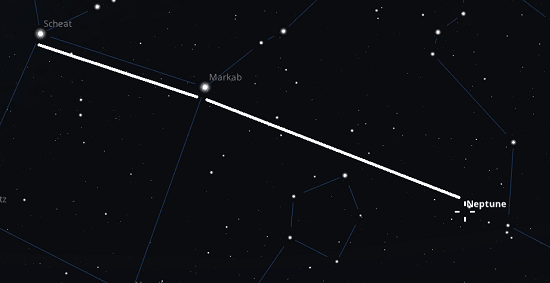 Draw an imaginary line from Scheat to Markab and extend it 1.5 times. The line now should point to Phi Aquarii.

Step 6: Getting to Neptune 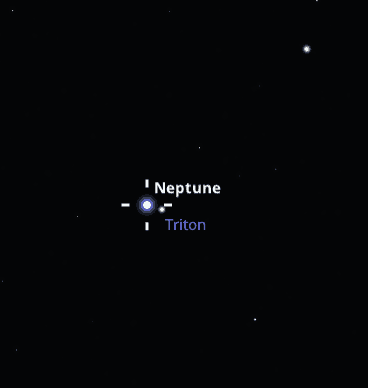 Neptune will be nearby Phi Aquarii. Just point your telescope to look for the blue ice giant.

This pdf might come in handy to you when trying to observe Neptune.

Is There An Easier Way?

Yes, there is. If spotting Neptune manually seems too much trouble to you, there are software which can help. Two of my personal favorite are Stellarium (free) and Sky Safari (paid).

Let’s see how to spot Neptune with Stellarium:

First, go to the web-version of Stellarium. Here is the link. Once you have entered the website, you should see an option to choose the location in the lower-left corner. Use that option to choose your location as exactly as you can.

After you have selected the location, now you should be able to pinpoint the location of any object in the night sky. You should see a search bar in the upper-middle portion.

Type in the name of the object you want to look at and the software will present its current location (from your geographical area exactly at that time).

Here I’ve selected Neptune, my location is Dhaka, and the software presented me with the location of Neptune:

Neptune’s Appearance Through A Telescope

Neptune is the farthest planet from Sun. In fact it is so far that, when Neptune is closest to us, its size gets only 2.4 arcseconds. Even with a decent power telescope, you can hardly identify Neptune. It will seem like a star like disc with a bluish hue.

Do you know why Neptune looks blue? It’s because of Methane. Neptune’s atmosphere is heavy with Methane. Methane is known for absorbing red light and reflecting blue light. That’s the reason behind Neptune’s blue beauty.

If your telescope is using 100x magnification, you’ll only be able to point out Neptune as a star-like body with a bluish hue.

With 200x magnification, Neptune will appear as a planet with a disk-like appearance.

For amateur stargazers, it is not yet possible to observe the surface details of Neptune. Don’t worry though. Seeing only the Neptune will always be a great achievement for any astronomer.

Can We See The Moons of Neptune? 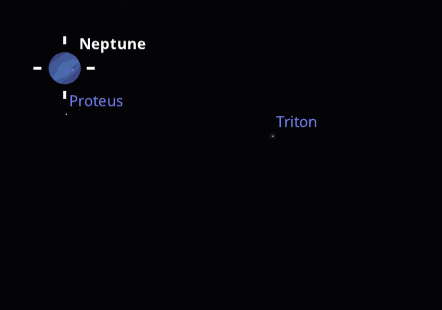 Neptune has many moons. Among them, the largest one is the Triton. One interesting fact about Triton is, unlike all the other moons of the solar system, Triton orbits against the direction of Neptune’s spin.

Triton is the 7th largest moon in the solar system. However, it is so far away that, you can’t see Triton even with a decent powered telescope.

Can You See Neptune Without A Telescope At Night?

It is not possible to see Neptune with naked eyes. If you don’t have a telescope, you can try with a high-powered binocular. However, the view through a binocular might not be that much satisfactory.

So, this is my detailed guide on how to see Neptune with a telescope. Seeing Neptune is not easy, but it is certainly worth the try.

I have divided the whole process into steps and explained each of the steps in details so that you can understand. I hope I’ve made the explanation clear for you!

Wish you all the best for your journey to see Neptune.

link to How To Clean A Telescope Mirror?

Telescopes are a delicate piece of technology, and they deserve great care. You will view distant galaxies with this piece of hardware, and so it needs to be in perfect working condition at all...

Continue Reading
link to How to Tell If Telescope Needs Collimation?

Telescopes are precious pieces of hardware. The delicate nature of the lenses means that a telescope cannot perform optimally if its lenses are not in proper working condition. That's why whether...