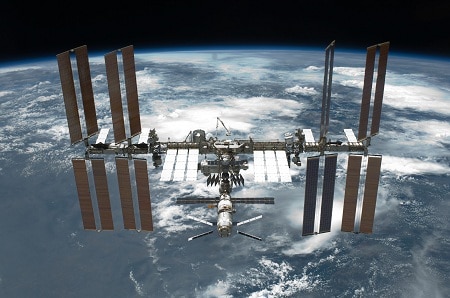 Have you ever wondered if you can see satellites with or without a telescope? Can satellites really be seen with the naked eye? If not, can instrument like a telescope or binocular help us to see the satellites? I’ll answer all these questions in this article.

Yes, you can clearly see satellites with a telescope. Even satellites can be seen with the naked eye too! You just need to know when and where to look.

Now, I am going to explain how can you see satellites with a telescope.

So, let’s get started!

How Many Satellites Can You See? Currently, more than 35,000 satellites orbit our Earth. It is not difficult to spot them. If you can look at the sky near dusk or dawn when the sky is relatively darker, you’ll definitely see one of the 35,000 satellites within just 15 minutes.

However, among these 35,000 satellites, most are junk rock pieces. Their sizes range from a softball to about 30 feet. There is an organization that keeps track of all these orbiting rocky debris. It is the JSpOC (Joint Space Operation Center).

Which Satellites Should You Observe First?

The first thing you should see is the ISS (International Space Station). Currently, ISS is the brightest and at the same time, the largest man-made object orbiting the Earth.

Here are some interesting facts about the ISS:

Even the ISS can be so bright that, at times it can be seen as bright as the Venus. During some time of the year ISS can appear 16 times brighter than the Sirius (Sirius is currently the brightest star seen from Earth). Thanks to the sunlight and reflective solar panels, the ISS can even sometimes “flare” in the dark night sky!

What Are Some Other Satellites To See?

Some other satellites to look for in the night sky are Tiangong-1 space laboratory from the China, Soyuz and Progress Spacecraft from the Russia, Orbital ATK’s Cygnus Capsules, SpaceX’s Dragon etc. Also, the Hubble Space Telescope will surely be a treat to your eyes!

How To See ISS With (Or Without) A Telescope

The best time to see the ISS is during the Northern Summer. At this time of the year, the nights are the shortest. This time the ISS remains illuminated by the sunlight throughout the whole night. Even, you can see multiple passing of the ISS as it revolves the Earth every 1.3 hours on average.

There are mainly two types of passes that the ISS goes through: Type 1 and Type 2.

During the Type 1 pass, the ISS will appear in the southwestern region of the sky. Then it gradually sweeps over to the northwest. Type 1 passes are mainly visible before the sunrise, in the morning hours. When the early July hits, you’ll see type 1 pass in the evening, just after the sunset.

Type 2 passes will be visible generally during the morning hours in early July. During the late July, the appearance will gradually shift over to the evening.

Surely you must be asking yourself when to look and where depending on your geographic location. Well, that’s not a problem anymore in today’s era of the internet. There are lots of sites that can help you with ISS appearance information depending on your Geolocation. I prefer Spot The Station most. It is a service from NASA, so you know it is authentic.

Just go to the site and perform the following:

When you visit the site, you’ll first see a map with a box labeled as ‘Enter your city of town’. Type the city or town you are in and from the dropdown suggestions, select your city. If you can’t find your city, choose the one nearest to you.

After choosing the city, you’ll see a map pinpoint of your location. Select the pin, you’ll see an option pop up ‘View sighting opportunities’. Select that.

After you select that option, you’ll be presented with a timetable with the information on when the ISS will pass over your geographic location. The table will contain several columns like Date, Visible, Max Height, Appears, Disappears, etc. if you want to learn more about these columns, read this article.

Some Tips When Observing The ISS

So, this is my guide on how to see satellites with (or without) a telescope. I hope you’ve found the guide helpful!

link to What Can You See With A 50mm Telescope?

Who doesn’t like stargazing at night! But it can be a very expensive hobby. So if you are on a tight budget and still want a decent telescope for stargazing then a 50mm telescope is the best option...

If you are in the market to buy a telescope, the chances are very high that you stumble upon choosing between Refractor Telescope orReflector Telescope This article will walk you through the...