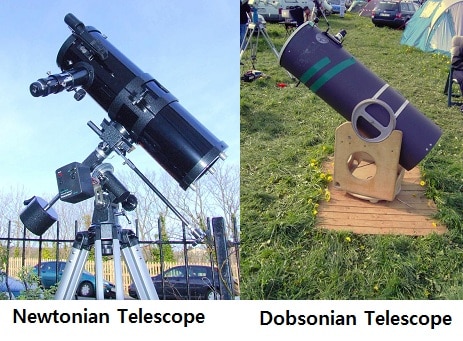 There are a lot of similarities between these two telescopes compared to the dissimilarities. To understand both of these telescopes better, we’ll take a closer look at each of the telescopes in turn.

As the name suggests, the Newtonian telescope was invented by none other than Sir Isaac Newton in 1668. It is also known as the reflecting telescope.

By this way, images were no longer blurry or distorted. Till now, this reflecting telescope is very popular and widely used.

Till now, various types of reflecting telescopes have been invented. However, the most easier one to build is the Newtonian telescope.

Newtonian telescopes are not made for much portability. Too much handling can disturb the alignment of the primary and secondary mirrors. As a result, you may often need to realign the mirrors before starting out.

Why Dobsonian Telescopes Have Become So Much Popular?

We need to be sure of one thing when using Dobsonian telescopes. As these telescopes are generally used to observe the deep-sky, there should be less to no light pollution around you. If you live in a city, that might prove to be a problem. However, don’t worry.

In this article of mine, I’ve explained how you can use a telescope even within a city.

There are some specific features that turn a Newtonian telescope into a Dobsonian one. Here are the features in details:

Let me explain a bit the differences between these two mounts. With the Altazimuth mount, the telescope can go up-down and right-left which is pretty much intuitive. However, in case of equatorial mounts, the telescope can move in only one direction to track an extraterrestrial object- the right ascension.

Regular Newtonian telescopes use fiberglass or aluminum to produce the tubers for the telescope. However, Dobson chose a much different but effective material for the tubes.

He chose paper, more specifically, hard paper (the ones we typically see in construction sites) for making the tube. This provided several advantages over regular telescopes including-

These are the most major differences between Dobsonian telescopes and Newtonian telescopes. As I have said, both of these have many more things similar than differences. However, each of them has a unique application in different fields and both are extremely important for astronomy.

I hope this article has clearly stated what is the difference between a Newtonian and Dobsonian telescope.

If you ask me, I’ll suggest the SkyQuest XT8 model from Orion. This is a classic Dobsonian telescope equipped with everything you’ll need for stargazing. The optics is 8 inches in diameter, so the light gathering capability is quite impressive. If you want to check the latest price at amazon, click here.

Lastly, I want to conclude this article by saying that, we can designate Dobsonian telescopes as a variation of the Newtonian telescopes. There aren’t many differences between them.

link to What Can You See With A 50mm Telescope?

Who doesn’t like stargazing at night! But it can be a very expensive hobby. So if you are on a tight budget and still want a decent telescope for stargazing then a 50mm telescope is the best option...

If you are in the market to buy a telescope, the chances are very high that you stumble upon choosing between Refractor Telescope orReflector Telescope This article will walk you through the...