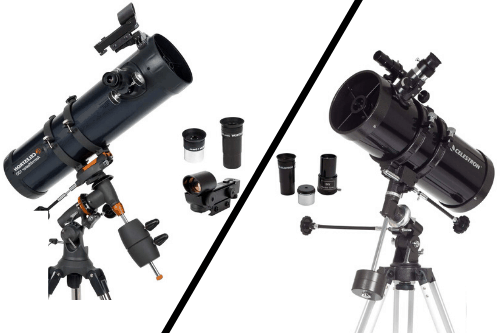 There’s a lot you can see with your own eyes, but having a suitable telescope gives you the chance to go beyond your visual restraints and have a closer look at the mystic space. If you have been surfing around the internet researching entry-level telescopes and stumbled upon the Celestron Powerseeker 127EQ vs Astromaster 130EQ debate, this article is for you.

Powerseeker 127EQ and Astromaster 130EQ are different models from the same manufacturer (Celestron) and share many similar attributes since both of them incorporate a beginner-friendly design.

We will compare both models here, but before we do so, we will take a look at each of them individually.

Celestron Astromaster 130EQ is a Newtonian reflector that offers a bundle of top-quality optical components, high aperture and dual usability (suitable for both extraterrestrial and terrestrial operations) at a conveniently low price.

Boasting an impressive aperture of 130mm (5.1inches) along with a highly useful magnification power of 260x, the technical details of this model is quite appealing. The sleek, compact design with Celestron’s German equatorial mounting system makes it easy to carry along and view movable objects in the sky.

Even though Celestron Astromaster 130EQ drew rave reviews from its users for its marvelous optics, many were left disappointed by the telescope mount and the tripod.

The accompanying tripod is very light. Whereas it does promote better portability, it struggles to give your telescope a firm balance at its fully extended form. Thankfully, it’s nothing that you can’t get used to and of course, you can always buy a different tripod to improve your experience.

In terms of portability, it’s as mobile a telescope can get. It will take up minimal space in your car trunk, no matter how small your car is, you will always have room for more luggage and other gears. If you fancy a bit of stargazing during your camping getaways, Powerseeker 127EQ is a perfect pick for you.

Backed up by coated optical glass units, the 127mm (5inches) aperture and 1000mm focal length of the telescope is capable of delivering crisp and dazzling images of a vast collection of space objects.

You get a 20mm and a 4mm eyepiece with this telescope alongside a 3x Barlow lens. Regarding optics, the 4mm lens is a bit overpowering for this scope, and the Barlow lens wouldn’t be of that much help as well. It offers magnification up to 750x, but you’ll find that the Powerseeker 127EQ functions best at low to mid magnification situations.

The 20mm and 10mm eyepieces suit well with the Astronomer 130EQ configuration. Unfortunately, the same can’t be said for the 4mm Ramsdens that comes with the Powerseeker 127EQ. It can offer magnification up to 250x, but the field of view is too narrow (40°).

Powerseeker 127EQ comes with a Barlow lens that can triple the magnifying power of each of its lenses. There is no Barlow lens included with Astromaster 130EQ. You won’t find much use of it, but I guess having an option never hurts, so Powerseeker 127EQ does have the upper hand when we are talking about magnification.

Astromaster 130EQ is the clear winner here! The finderscope that comes with the Celestron Powerseeker is a plastic made 5×24 finderscope, which takes a long time when you try to align it with the telescope.

The Astromaster 130EQ, on the other hand, has a more modern red-dot finder that can be easily aligned with the telescope.

Powerseeker 127EQ has a decent EQ-1 German mount. The metal build has the right amount of stability to hold your scope for hours. The slow-motion control cables are comfortable to use as well.

The Astromaster 130EQ mount is a CG-3 equatorial mount which is not the best fit for Newtonian reflectors in my opinion. There are stability issues and the rotation ability of the optical tube within its rings makes it even worse.

Celestron Powerseeker 127EQ and Celestron Astromaster 130EQ both are magnificent telescopes for aspiring space lovers with many similar qualities.

Even though there are some differences in the optical arrangements and auxiliary eyepieces, the performances these telescopes deliver aren’t drastically unalike. Since both of these are Newtonian reflectors, they share some of the cons too.

The use of spherical mirrors result in spherical aberrations in both of these scopes. This problem gets more and more imminent when you are using higher magnification. Therefore, keeping the magnification low is important to get a satisfactory view. The Astromaster 130EQ has lower chromatic aberrations of the two, which makes it qualified for earthbound explorations as well as navigating the sky.

So, which one of these two should you get? Is there a definite winner here? It depends on a variety of factors.

The Powerseeker 127EQ is a better pick for having better views of our neighboring planets, thanks to its longer focal length. You can catch some fine details of the lunar surface, the polar caps of Mars and the rings of Jupiter.

Powerseeker 127EQ is also a lighter model and is priced below the $200 mark. If you have a tight budget, prioritize exploring the solar system and want a lightweight telescope, go for Powerseeker 127EQ.

Astromaster 130EQ has more of a premium feel to it. It’s better looking and usable both within and beyond the horizons of our planet. It has a shorter focal length, but the accompanying eyepieces facilitate some fantastic views if you decide to have a look at objects lying outside the realms of our solar system.

It is also very easy to collimate compared to Powerseeker 127EQ. This could be the deal-breaker for anyone who knows about the hassle one has to go through while collimating a Bird-Jones type Newtonian reflector (like the Celestron Powerseeker 127EQ).

If you want a telescope that can serve dual purposes, that is more fitted for deep sky objects viewing, has a better finderscope and is easier to collimate than Celestron Astromaster 130EQ is the one for you.

Hope this article helped clearing out any confusion you had regarding the whole Celestron Powerseeker 127EQ vs. Astromaster 130EQ argument.