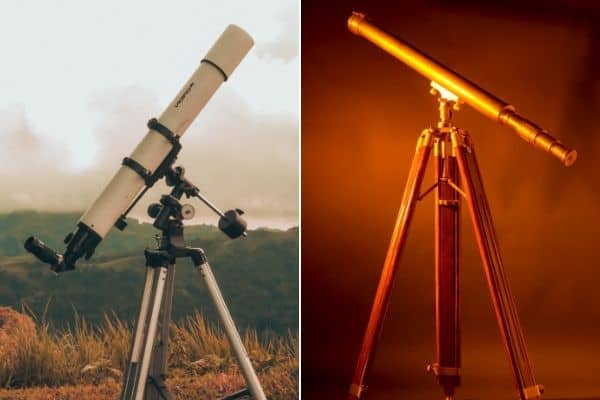 If you are in the market to buy a telescope, the chances are very high that you stumble upon choosing between

This article will walk you through the differences, pros and cons of refractor and reflector telescope for astrophotography.

Refractor telescopes rely on lenses and use the principle of refraction of light to enlarge an object and project the image on the eyepiece. Reflection law of glass is used in the construction of Reflector Telescope.

There are many substantial differences between Refractor and Reflector telescope. The differences are given below:

As the name suggests, refractor telescopes rely on lenses and use the principle of refraction of light to enlarge an object and project the image on the eyepiece. Refractor Telescopes first originated from Europe in the early 1600’s.

Keplerian Refractor design produces an image by using a bi-convex lens objective which has an extended focal length and a bi-convex lens eyepiece which is placed behind the focal plane. As a result, a horizontally and vertically inverted image is produced.

There are some drawbacks of using refracting telescopes which are stated below.

A concave mirror is positioned at the beginning of a large tube-shaped housing. The opposite end of the tube is left open to allow light to pass through the housing. A small mirror inclined at a 45-degree gradient is placed inside of the tube. The light is then reflected by the mirror and projected towards the opening on side of the telescope housing which contains a convex lens eyepiece.

There is a limitation to this design. The small mirror upon which light is reflected back to the eyepiece has a tendency to slightly lessen the essential surface area of the objective. But the reduction is very marginal.

Some people may find looking sideways at objects difficult. That is why a distinct method known as “Cassegrain Reflector” is used to project light to the direction of the eyepiece.

Cassegrain Reflector method uses, a small convex non angled mirror. That small convex mirror reflects light back towards the opening in the center of the objective mirror which contains the convex lens eyepiece. As a result, we can observe objects looking at the back of the telescope.

Though reflector telescopes are really good at what they do, there are a few cons.

Refractor Telescope Or Reflective Telescope Which One Is Better?

If you are looking for a telescope to use professionally, a reflector telescope is the one you should go with. As they can capture more light and can provide superior image quality over the refractor telescope.

And if you are a hobbyist, a refractor telescope is the perfect type of telescope for you. Because they can be compact and are much easier to maintain compared to reflector telescope.