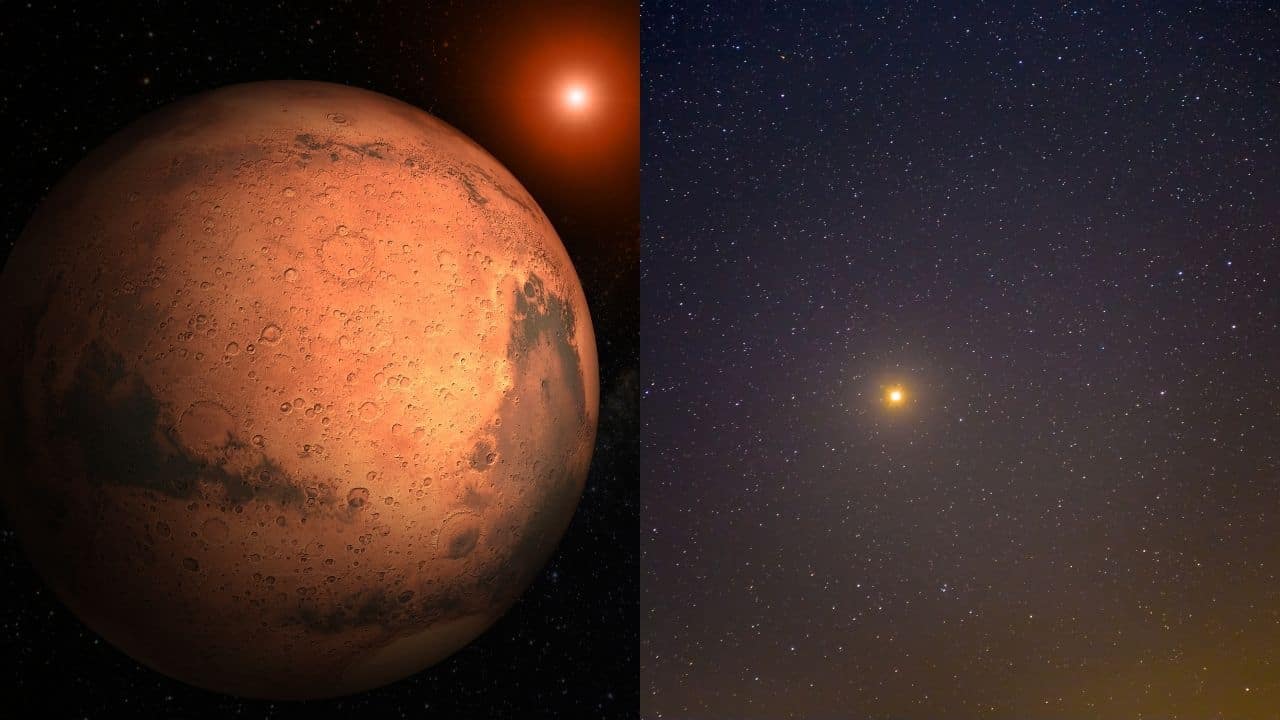 Mars is the third closest planet to Earth, right after Mercury and Venus, but it is the most popular planet in our culture. Many people wonder if it is possible to view Mars from Earth without the help of a telescope. That is why I decided to write an article on this subject matter.

So, when can you see mars from earth without a telescope? You can see Mars anywhere between dawn and dusk when the sun is just about to set on the horizon.

There are many other factors that determine your viewing experience of Mars, so keep reading below to know all about this magnificent planet and how you can see it without a telescope.

When Can You See Mars?

Mars habitats a zone that is directly opposite from the Sun, so when the Sun sets down, Mars rises up in the night sky and when the Sun rises up, Mars sets down. You can easily distinguish Mars from the other planets because it gives off a red hue which is unlike any other planet in space.

Just when evening kicks in, you can spot Mars in the southeastern skyline. Mars will be at the highest in the night sky when it’s midnight, so that is the most optimal time to witness this planet without a telescope. As Mars is very close to Earth, it is among five planets that appear brightest in space, and it’s close to the Moon, so it will be almost as bright as the Moon.

Remember, when you are looking at Mars, you can also spot the planet Saturn and a bright star known as Antares. You can also see Mars with a telescope, although its tiny size may leave you disappointed. So, it is best viewed with the naked eye.

Can You See Mars Without A Telescope?

As mentioned earlier, Mars is a very bright planet due to its proximity to Earth. That is why it is visible even without the help of a telescope. Although that may be the case, it can be a difficult proposition.

This is because of the vast distance between Mars and Earth, which can be more than 45 million miles when these planets are furthest apart from each other.

Mars when watched with the naked eye will seem like a tiny reddish dot, so you will need a sharp set of eyes and perfectly clear weather. The best time to witness Mars from Earth is when the two planets are closest to each other. This phenomenon is known as opposition when both these planets come very close to one another.

Every two years, Mars will come perfectly in alignment with Earth and the Sun, as Earth takes the middle spot between Mars and Sun. So, this is the time when you will have the perfect view of Mars from Earth without the need for a telescope. Below are the opposition dates for Mars:

These are the three dates when Mars will appear to be the biggest in the night sky, so it will shine the brightest during this time. So, if you want to witness the magnificent reddish glow of this planet, mark your calendars for these dates.

The Relationship Between Mars and Earth

Most of the time, Mars will pull away from Earth, and as it does so, its brightness will dim further as it moves away. By the middle of May, Mars will move so far apart from Earth that it will begin to set before midnight, and you should avoid this month if you want to spot Mars.

By the end of August, Mars will be some 243 million miles away from Earth, so it will shine dimmer than the Moon, making it hard to spot it.

The months of September and October are when it’s hardest to spot Mars when it appears so small that you would be left with bitter disappointment if you plan of watching Mars during this time period. At the end of November, this red planet will appear low in the east-southeastern skyline.

During New Year’s Eve, Mars will rise on the horizon at 5:30 in the morning. If you want to kill two birds with one stone, mark your calendar for the date of July 30, as this is the time when Mars will appear very close to Venus. The evening of July 30th will be when you can see a slightly dim Mars standing beside a very bright and proud Venus.

Mars is the most talked about planet in our galaxy. This is because it continues to captivate our imagination even after all this time. Mars occupies thousands of science fiction books and it is where the “little green men” originate from in our folklore. There is a reason why this red planet still fascinates us in the 21st century.

This article talks in-depth about the opposition and apparition of Mars, so it will help any would-be stargazing enthusiasts to find the proper time to spot this magnificent planet. Just find a quiet area away from the hustle and bustle of a city and wait for clear skies, because you don’t want any clouds to ruin your viewing experience.

So, when can you see Mars from Earth without a telescope? I hope you have found your answer by carefully going through all the information listed in this article.