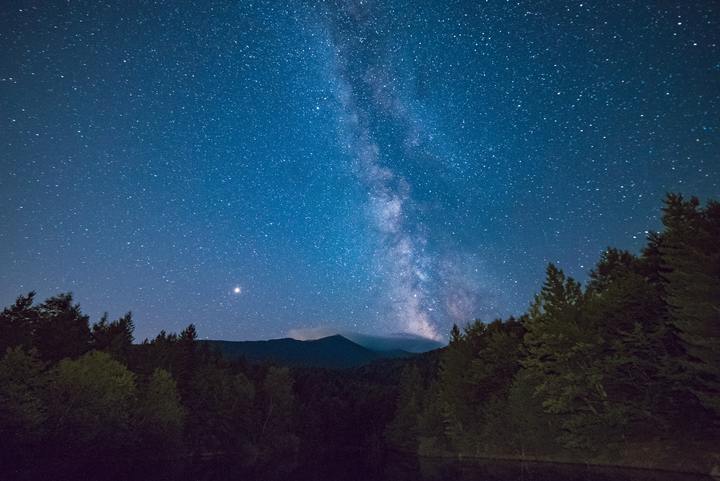 Many beginner astronomers often get confused about the time to go for stargazing. There are several times and seasons that are ideal for stargazing. Here’s what I’ve found after an extensive research: The Role Of Moonlight

The light that is cast by natural moonlight usually washes away the stars near its path. Only the stars that shine brightly in the night sky is visible during moonlight. Distant stars lack the power to shine brightly as they are far apart from Earth, thus it takes longer for their light to travel on to the Earth.

When the moon is shining at its pick, the natural moonlight is the strongest during this time. This happens during the time of the full moon. So, it is a very bad time to go stargazing as you can only see a handful of stars, and only the brightest of them.

During the full moon, the night sky gets very dark. Even at spots where light pollution does not occur due to smog produced by cities, you will hardly be able to see a star in space!

A new moon happens 12 times every year. If you follow a lunar calendar then you will know exactly when the new moon will appear on the horizon.

The Events Before And After The New Moon

Just before the new moon appears in the night sky, you can enjoy stunning views of space. This is because no moon is visible in the sky, and so the moonlight cannot wash out the deep sky objects. This is also true just after the new moon passes by, as there is no interference caused by the moonlight during this stage.

This is the best time to go stargazing. You can see thousands of stars during this period. Even distant objects such as galaxies and nebulae can be visible in the night sky. Just travel to a dark sky location where there is no light pollution. These locations fall in the countryside as there is less light in these places.

Dark sky sites can help you to see the Milky Way in all its glory. You can use a telescope to enhance your stargazing experience. You can even see the formation of new stars during this period. Although if you just want to see the Moon, you can do that with your naked eye without the need for any binoculars or telescopes.

By following a dark sky calendar, you can know exactly when the new moon will appear on the horizon. Thus, if you avoid these times then you will be able to see so much more in space. Using a telescope will also enable you to see fainter objects that are far out in space.

The Time During Summer Twilight

During summertime, the skies remain brightly lit for most parts of the day. The nights are shorter during this time which means that there are fewer opportunities to go stargazing during this time. The sky fades during early morning just before sunrise and the evening twilight is also prolonged during the summer months.

There is hardly any dark sky visible during the summer solstice, which is the longest day of the season. So, you would be better off waiting during this period.

The Best Seasons For Stargazing

The seasons of Spring and Autumn are the times when the night sky is visible as the skies are clear. This time comes during the start of October, and this is when the most stargazing events take place. Most observatories are usually closed during the summer months as it simply does not get dark enough for the public to go stargazing.

How To Decide On The Ideal Time To Go Stargazing

Multiple factors play a role in your stargazing experience. Once you start thinking about all these factors, it can get tricky when you want to decide on the timing. By following a dark sky calendar, you can know exactly when the sky will remain the darkest. These calendars can help you pick the best time to go stargazing as it will display when the new moon comes out.

Tips To Enhance Your Stargazing Experience

Below are some tips that you can utilize to get more intimate with the night sky above you.

1. Get Up To A High Location

If you are living in the city and want to marvel at the stars above you, then you should aim to go to a high location above ground. Stay clear from streetlights as they can interfere with the visibility of the dark sky objects.

Cities are filled with smog and lots of light pollution. So, once you climb to the top of large buildings, you can stay clear of much of this light pollution, thus aiding your viewing experience of the night sky. Observatories that are positioned near hilly areas are a great way to observe the stars.

Binoculars don’t have the same magnification capabilities as modern telescopes, but they can still get you up close to the Moon and its craters. You don’t even need an expensive binocular to start with, as cheap brands can do the work just fine.

iOS and Android apps can be of great assistance to you if you want to stargaze. Apps such as Starwalk and Google Sky Map can let you access more information about the space around you.

If you are excited about space, then you should follow your favorite astronomers on Twitter and Facebook. This will help you stay in touch with the latest events regarding space.

Is there a rare eclipse happening soon? Following astronomers can be a great idea as you can become knowledgeable about all the exciting events in space.

5. Let Go Of Expensive Gadgets And Use Your Eyes To Take In The Views

Although there are thousands of equipment that are there to help you stargaze, nothing beats the natural eyesight. You can’t compare the experience of observing the night sky with your set of two eyes with anything else.

Our ancestors did not have access to modern telescopes. Yet they were able to appreciate the space above them. Once in a while, we should let go of our gadgets and marvel at the heavens above us, just with our natural eyes. It would help us to see space in a new light.

If you are lucky enough, you can even see the Andromeda galaxy, which is more than 2.5 million light-years from us! Space can be described as an endless location with seemingly no end, and when we are stargazing, it helps us to truly appreciate the vastness of the cosmic bodies.

Stargazing can be an amazing experience, one that you can enjoy with your friends and family. With the help of a dark sky calendar, you can identify the perfect time to go stargazing.

The seasons of spring and autumn offer the best times for this activity as the temperatures are mild and the sky remains dark for prolonged periods. The days are shorter during this period compared to the summer months.

Once you know how to avoid the full moon events, you can pick an ideal time to go stargazing for you and your family. You can also use a telescope to appreciate the night sky in a better way.

Hope this article has helped you to understand this topic in a more nuanced manner.